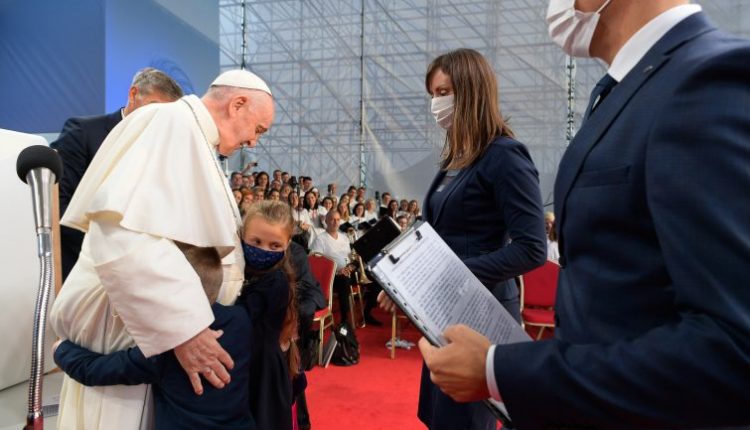 Pope in Slovakia: “when the Church stops, she becomes sick”

Pope Francis concluded his 34th apostolic journey with an invitation “to persevere on this journey”, for “when the Church stops, she becomes ill.” A journey into the heart of Europe to speak to Europe. The cross is not “a flag to be waved”, it cannot be reduced to a “political symbol”. “Mea culpa” for the stigma of anti-Semitism and the prejudices against the Roma community

“When the Church stops, she becomes sick. When the Bishops stop, they make the Church sick. When priests stop, they make the people of God sick”, Pope Francis said in unscripted remarks in the homily for the Holy Mass celebrated in the national Shrine of Sastin, where the faithful venerate Our Lady of the Seven Sorrows, Patron Saint of the Country. In the last leg of his visit to Slovakia, the words of the successor of Peter resonate as a message that extends far beyond the local Church. Speaking to some 60,000 people gathered around him, Francis calls to live the faith as Mary did, a faith that goes forth: “Overcome the temptation to a passive faith, content with this or that ritual or ancient tradition. Instead, you leave yourselves behind and set out, carrying in your backpacks the joys and sorrows of this life, and thus make your life a pilgrimage of love towards God and your brothers and sisters.” For

”faith cannot be reduced to a sweetener to make life more palatable”: “Where Jesus is concerned, we cannot remain lukewarm, with a foot in both camps.”

Just like all of Europe, Slovakia needs prophets. “This has nothing to do with hostility toward the world, but with being signs of contradiction within the world. Christians who can demonstrate the beauty of the Gospel by the way they live. Christians who are weavers of dialogue where hostility is growing; models of fraternal life where society is experiencing tension and hostility; bringers of the sweet fragrance of hospitality and solidarity where personal and collective selfishness too often prevails, protectors and guardians of life where the culture of death reigns.” A faith that becomes compassion “identifies with those who are hurting, suffering and forced to bear heavy crosses. A faith that does not remain abstract, but becomes incarnate in fellowship with those in need. A faith that imitates God’s way of doing things, quietly relieves the suffering of our world and waters the soil of history with salvation.”

The words most echoed by the media come from the Byzantine Divine Liturgy presided over in Presov: “Crucifixes are found all around us: on necks, in homes, in cars, in pockets. What good is this, unless we stop to look at the crucified Jesus and open our hearts to him, unless we let ourselves be struck by the wounds he bears for our sake, unless our hearts swell with emotion and we weep before the God wounded for love of us. Unless we do that, the cross remains an unread book whose title and author we know, without its having any impact on our lives.

The most widely circulated images are those of the visit to the Bethlehem Centre in Bratislava, run by the Sisters of Mother Teresa in the “Luník IX” district, home to Slovakia’s largest Roma community:

“In the Church, no one ought ever to feel out of place or set aside. Nobody ought ever keep you or anyone else away from the Church! you are always welcome! Always feel at home in the Church, and don’t ever worry about whether you will be at home there. All too often you have been the object of prejudice and harsh judgements, discriminatory stereotypes, defamatory words and gestures. As a result, we are all poorer, poorer in humanity. Restoring dignity means passing from prejudice to dialogue, from introspection to integration.”

In his pilgrimage to the heart of Europe, the Pope speaks to the entire continent. The future of Europe is mentioned already in Francis’ first speech in Slovakia :

“How can we hope that Europe will rediscover its Christian roots when we ourselves are not rooted in full communion?

Particular interests, historical reasons and political ties should not be insurmountable obstacles in our path.” “To be a message of peace in the heart of Europe” is the Pope’s encouragement to the Country in his address to national authorities. “Finding new ‘alphabets’ to proclaim the faith” is the “most urgent task” facing Slovakia and the “peoples of Europe”, Francis said in his meeting with bishops at Saint Martin’s Cathedral :

As in Budapest, the meeting with the Ecumenical Council of Churches and the Jewish community was given special significance also on the second leg of the journey. “Let us unite in condemning all violence and every form of anti-Semitism, and in working to ensure that God’s image, present in the humanity he created, will never be profaned”, is the plea that resounds from Rybné Namestie Square in Bratislava, echoing the call to defuse the threat of anti-Semitism made in Budapest.

“Here, in this place, the Name of God was dishonoured – is the mea culpa in the place where a synagogue stood until the 1960s and which today is the site of a Holocaust memorial – for the worst form of blasphemy is to exploit it for our own purposes, efusing to respect and love others. Here, reflecting on the history of the Jewish people marked by this tragic affront to the Most High, we admit with shame how often his ineffable Name has been used for unspeakable acts of inhumanity! How many oppressors have said: “God is with us”; yet it was they, who were not with God!”

Crowds flock in to attend the Pope’s meeting with young people. Thirty thousand are gathered at the Lokomotiva Stadium in Kosice. The Pope addresses them directly: “To grow disconnected from life, or to fantasize in a void, is not a good thing; it is a temptation from the evil one. God wants us to be firmly grounded, connected to life. Never closed, but always open to others! Grounded and open. Understood? Grounded and open.”