Pope Francis: “This square has undergone a period of fasting, and now it is full of you!” 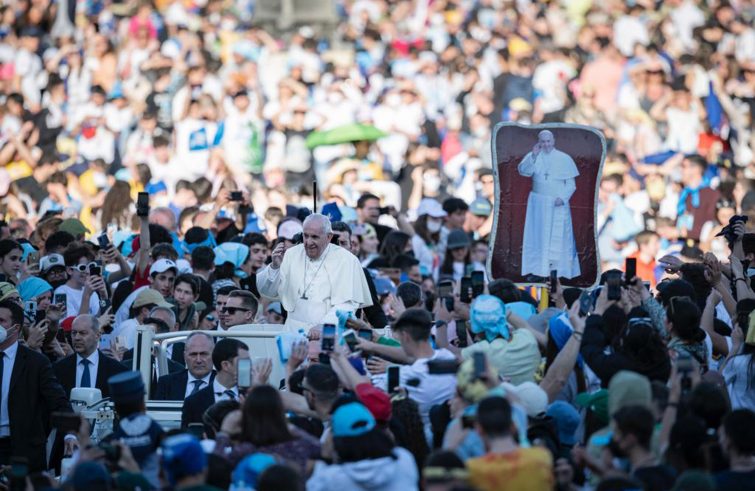 “In addition to the pandemic, Europe is experiencing a terrible war, while injustices and violence continue in many regions of the Earth that destroy mankind and the planet,” the Ppe said during a prayer vigil with Italian adolescents promoted by the Italian Bishops’ Conference. In the first public meeting in St. Peter’s Square after the pandemic, 80,000 young people, accompanied by sixty bishops, by their parents and educators, filled the area extending from Bernini’s colonnade to Via della Conciliazione. Francis reciprocated their warm embrace, crossing the boundaries of the square on board the popemobile. Shortly before, the teenagers enjoyed a special moment of festivity, as they listened to the testimonies of their peers and the songs of Blanco and Matteo Romano, two of their favourite pop singers – the former a winner and the latter a contestant at this year’s Sanremo Music Festival. “It is often your peers who pay the highest price, for not only is their existence threatened and made insecure, also their dreams for the future are trampled on”, was the warning cry of the Pope with regard to the clouds of war looming on the horizon: “So many brothers and sisters are still waiting for the light of Easter.” “Thank you for being here!”, the Pope’s opening greeting: “This square has long been waiting to be filled with your presence, your faces and your enthusiasm. Two years ago, on March 27, I stood here alone to offer to the Lord the prayers of a pandemic-stricken world. You were probably in your homes in front of the television that evening, praying alongside your families.”

“Two years have gone by with this square empty,” he continued, “and it was like when we were fasting: the square underwent a period of fasting, and now it is full of you!”.

“There are times when life puts us to the test, when it confronts us with our frailties, making us feel vulnerable, naked, alone,”Francis asked: “How many times in this period have you felt alone, separated from your friends? How many times have you been afraid? You must not be ashamed to admit: I am afraid of the dark! All of us are afraid of the dark! Fears ought to be expressed for them to be dispelled! They must be made manifest. Once they are made manifest, the truth breaks through!” “Darkness plunges us into crises, that’ s true, but during those crises we have to speak out and express them so they may be overcome!” “If we are here today, we owe it to these young people”, said Card. Gualtiero Bassetti, Archbishop of Perugia-Città della Pieve, President of the Italian Bishops’ Conference, in his welcoming remarks. His Eminence thanked the teenagers who arrived from all over Italy and their accompanying teachers, bishops and educators. He expressed the hope that these young people may “help us revive the Gospel amidst today’s dramatic and challenging circumstances in which the Lord is asking us to bear witness to our faith”.

“You may lack the experience of adults, but you have the ‘instinct’ to rediscover the Lord: don’t lose it!”,

the Pope told the youths.  “May your intuition inspire your generosity”, Francis continued off-text: “Do not be afraid of life. Life is beautiful, give it to others, share it with others!” “In times of difficulty, children ask for their mothers”, the concluding reference to Mary: “She was approximately your age when she embraced her extraordinary vocation to be the mother of Jesus. May she help you to respond to the Lord with full trust: `Here I am’. May she teach you to say ‘Here I am’ and not be afraid. Embolden yourselves to go forward!”

Among the testimonies, twelve-year-old Mattia Piccoli, awarded with the honorary title of “Alfiere della Repubblica” by President Mattarella in recognition of the help given to his father suffering from premature Alzheimer’s disease at the age of 40, was the most moving. “I was a typical six-year-old boy who only thought about playing. Everything seemed fine until I started to notice that my father was not himself anymore, he was acting differently, sometimes he would forget important things like picking me up from school or buying the groceries. As I said before, I didn’t attach much importance to it, but as time went by my father started behaving oddly – he didn’t want to play with me anymore and sometimes, when I asked him to watch TV, he was unable to switch it on. I could not understand what was happening to my father. On December 19 we learned something that was to change my family’s life: my father was diagnosed with early-onset Alzheimer disease. I had no understanding of what kind of illness it was, so one day my mother told me about the extent of the impact of this type of disease, especially at a younger age.” “From then on, it was my job – not having any external assistance – to help my dad with his daily activities, which he was no longer able to do on his own, such as taking a shower, tying his shoelaces or comforting him when he didn’t know where he was,” Mattia said:

“I never did anything unwillingly or out of obligation. I only wished to help my father as an act of love, remembering all that he had done for me.”