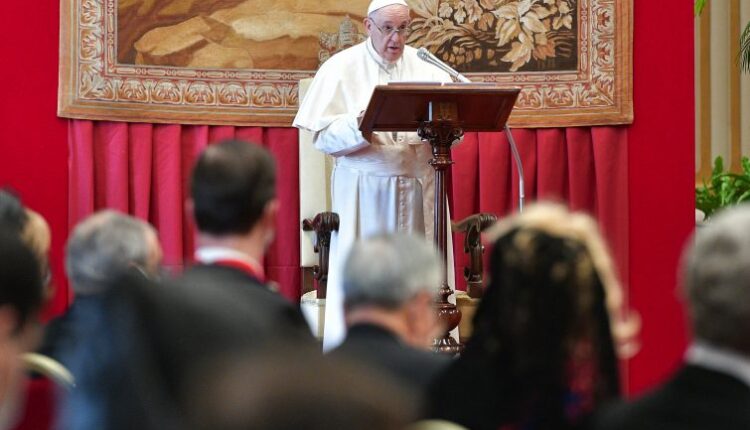 Pope Francis: “Along with vaccines, our world needs fraternity”

Pope Francis delivered his address to members of the Diplomatic corps in the more spacious Hall of Blessings, for the first time, to respect the need for greater social distancing imposed by the pandemic. Five are the crises deserving analysis in this 2021 – “a time that must not be wasted” –  a health crisis, an environmental crisis, a social and economic crisis, a crisis of politics, and a crisis of human relationships. Along with vaccines, fraternity is the true cure we need in today’s world

This 2021 is “a time that must not be wasted”, said the Pope in the closing remarks of his address to the Diplomatic Corps – held in the Hall of Blessings, during a one-hour audience – . “It will not be wasted if we can work together with generosity and commitment” under the banner of fraternity, “the true cure for the pandemic and the many evils that have affected us”, Francis said. “Along with vaccines, fraternity and hope are, as it were, the medicine we need in today’s world”, said the Holy Father, whose address was devoted to analysing the crises that the pandemic has confronted us with: a health crisis, an environmental crisis, an economic and social crisis, a crisis of politics and a crisis of human relationships. In his final remarks, drawing on Dante Alighieri’s Letter to Cangrande della Scala, Francis dedicated a special thought to the people of Italy, “who were the first in Europe to deal with the grave effects of the pandemic”, urging them “not to lose heart amid the present difficulties, but to cooperate in building a society in which no one is discarded or forgotten.”

“I myself wish to resume my Apostolic Visits, beginning with that to Iraq scheduled for this coming March”,

Francis announced, pointing out that the pandemic “has led to a crisis, for it showed us the face of a world that is seriously ill, not only as a result of the virus but also in its natural environment, its economic and political processes, and even more in its human relationships.” Care as promotion of the dignity and rights of each human person is the first right deserving protection, for human life must be defended every moment, “from conception in the womb until its natural end:

“If we deprive the weakest among us of the right to life, how can we effectively guarantee respect for every other right?”,

the Pope said. “Concern for profit should not be guiding a field as sensitive as that of healthcare”, Francis cautioned, once again calling on all States “to ensure an equitable distribution of the vaccines, based not on purely economic criteria but on the needs of all, especially of peoples most in need.” With an important warning:

“It would be disastrous to put our trust in the vaccine alone, as if it were a panacea exempting every individual from constant concern for his or her own health and for the health of others.”

The second challenge that must be dealt with after health, is the environment, starting with Cop 26, which the Pope hopes “will lead to effective agreement” on climate change. In the economy

“There is need for a kind of ‘new Copernican revolution’ that can put the economy at the service of men and women, not vice versa.

a different kind of economy: one that brings life not death, one that is inclusive and not exclusive, humane and not dehumanizing, one that cares for the environment and does not despoil.” In this respect, Francis highlighted the “significant commitment of the European Union and its member states.”

In this time of pandemic “economic stability must be ensured for all, so as to avoid the scourge of exploitation and to combat the usury and corruption that afflict many countries in the world, together with the many other injustices that occur daily under the weary and distracted gaze of our contemporary society.”

Illegal or forced labour, prostitution and various criminal activities, including human trafficking, are the scourges to be overcome, alongside cybercrime and child pornography, with serious consequences for the most vulnerable. At the international level, the Pope said, it is necessary to relax sanctions and “forgive, or at least reduce, the debt that burdens the poorer countries and effectively prevents their recovery and full development.” With regard to migration, Francis said he looks forward “to the negotiation of the European Union’s New Pact on Migration and Asylum”, urging “to address in a consistent manner the issue of forced displacement.”

In the central part of his speech, the Pope stigmatised the crisis of politics, “which in some way lies at the root of the others.”

“The development of a democratic consciousness demands that emphasis on individual personalities be overcome and that respect for the rule of law prevail”,

said Francis, for whom “vitalizing democracies is a challenge in the present historic moment, one that directly affects all states, whether small or large, economically advanced or in the process of development.”

“We must not be afraid of reforms,

even if they require sacrifices and often a change in our way of thinking”, the Pope’s invitation: “Every living body constantly needs to be reformed, and the reforms taking place in the Holy See and the Roman Curia also fit into this perspective.”

“Our world has too many weapons!”,

is the Pope’s appeal for disarmament and non-proliferation of nuclear weapons.

“How I wish that 2021 were the year when the conflict in Syria, begun ten years ago, would finally end!”,

Francis exclaimed, whose desire for peace “obviously extends” to the Holy Land, Lebanon and Libya. The Pope mentioned other areas of the world that are also a cause for concern, these include the Central African Republic, Latin America, the Korean Peninsula and the situation in the South Caucasus.

Terrorism is “another serious scourge of our time”, “an evil” that “has intensified in the last twenty years, affecting various countries on every continent, above all in sub-Saharan Africa, but also in Asia and Europe”, often targeting places of worship.

“The pandemic, which forced us to endure long months of isolation and often loneliness, has brought out the need of every individual for human relationships.”

For the Pope, the crisis of human relationships is perhaps the most serious of all the crises caused by the health emergency, whose primary victims are students who were unable to attend school or university regularly. The increased in distance learning has also increased disparities and “has led to a greater dependence of children and adolescents on the internet and on virtual forms of communication in general, making them all the more vulnerable and overexposed to online criminal activities.” For Francis we are facing an

“educational catastrophe to which we must react for the sake of generations to come and for society as a whole.”

long periods of lockdown have also made it possible for families to spend more time together, but “not everybody has been able to live with serenity in his or her own home and some forms of cohabitation have degenerated and led to domestic violence.” Hence the Pope’s appeal to everyone, to civil and public authorities, “to provide support to the victims of domestic violence: unfortunately, as we all know, women, often with children, are those who pay the highest price.”

Over 200 priests died from COVID-19 in the first 9 months. The north of the country…