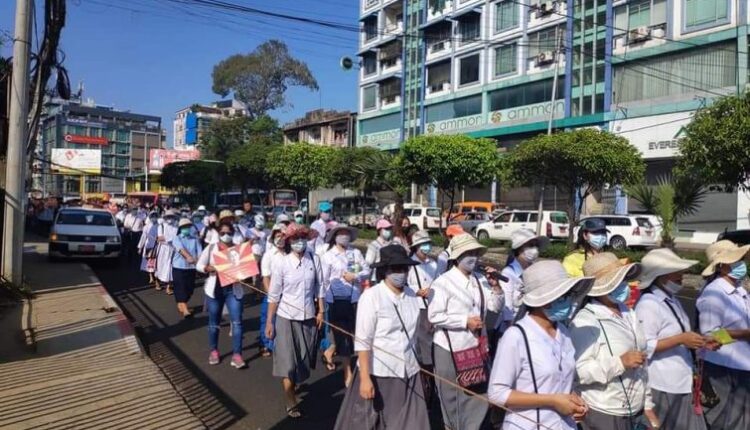 Catholics’ peaceful protest in Yangon, reciting prayers and the Rosary

Catholics join the demonstrations. In the past few days and yesterday, peaceful demonstrations were held in Yangon and across Myanmar calling for the release of Aung San Suu Kyi and all political prisoners and for the restoration of democracy. In a statement, 15 ambassadors urged national security forces to cease all forms of violence: “The world is watching.” Cardinal Bo quotes Oscar Romero: “A bishop will die, but the Church of God, which is the people, will never perish”

Nuns, priests and lay Catholics joined the protests of the people of Myanmar against the military coup on February 1. Hundreds of Catholics walked peacefully through the streets of Yangon city from Fatima Church to St Francis Church on Sunday 14 and recited prayers and the rosary. The same happened in the diocese of Kengtung on 11 February, while yesterday, in Christian-majority Kachin State, nuns stood outside a church holding placards reading “No to dictatorship” and “Listen to the voices of the people”, in support of protesters flooding the streets of Myitkyina, the State capital. The streets were mostly filled with young people chanting “Free Aung San Suu Kyi” and “We support CDM”, with reference to the civil disobedience movement.

Cardinal Charles Bo, Archbishop of Yangon, President of the Bishops Conference of Myanmar, followed the demonstrations and posted photos and messages on social media. On February 15 he tweeted a Statement signed by the ambassadors of the United States, the United Kingdom, Canada, Switzerland and the European Union delegation including Italy, Denmark, the Czech Republic, Finland, France, Germany, the Netherlands, Spain and Sweden. The Joint Statement was released while livestreamed footage shared on social media platforms – before the internet was shut down – featured the massive deployment of armoured vehicles and soldiers. “We call on security forces to refrain from violence against demonstrators and civilians, who are protesting the overthrow of their legitimate government – the Ambassadors write in their statement -. We unequivocally condemn the detention and ongoing arrests of political leaders, civil society activists, and civil servants, as well as the harassment of journalists. We also denounce the military’s interruption of communications, as well as the restriction of the Myanmar people’s fundamental rights and basic legal protections. We support the people of Myanmar in their quest for democracy, freedom, peace, and prosperity. The world is watching.”

Update: Australia and New Zealand joined the Joint Statement by 17 Ambassadors to Myanmar. “We call on security forces to refrain from violence against demonstrators and civilians, who are protesting the overthrow of their legitimate government.” pic.twitter.com/YaAyZwIxNP

Anti-coup protests are taking place not only in large cities but also in the villages and in the States of Kachin and Chin. Asian Catholic ”Ucanews” media outlet reported that on the night of 14th February security forces opened fire to disperse protesters in Myitkyina, according to video footage shared on Facebook. There were also clashes with protesters in Kachin and on the evening of 14 February, armoured vehicles were seen in commercial hub Yangon, Myitkyina and Sittwe in Rakhine State, according to media reports. The internet in Myanmar was shut down from 1am to 9am on Feb. 15.

Our Lady of Lourdes
Praying for peace in Myanmar
& Processing in support of Civil Disobedience Movement.
Diocese of Kengtung
11 Feb 2021

On Feb 14 Cardinal Bo tweeted the words of the Archbishop of San Salvador Oscar Romero, assassinated by a death squad gunman for having denounced the violence perpetrated by his country’s military dictatorship, and proclaimed saint by Pope Francis on 14 October 2018: “Those who have a voice must speak for those who are voiceless”, and  “You can tell the people that if they succeed in killing me, that I forgive and bless those who do it. Hopefully, they will realize they are wasting their time. A bishop will die, but the Church of God, which is the people, will never perish.”

“You can tell the people that if they succeed in killing me, that I forgive and bless those who do it. Hopefully, they will realize they are wasting their time. A bishop will die, but the church of God, which is the people, will never perish.”

Economic distress caused by the pandemic: for Caritas Switzerland the worst is yet to…